"Don't you ever think you're done learning - it's an ongoing process and you owe it to yourself to keep it that way."  RP 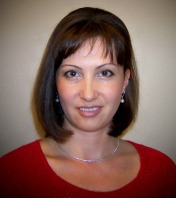 Rosie Pova is a mother of three living in Dallas, Texas with her family.
Born in Bulgaria, Rosie started writing in her early adolescent years. In middle school literature was Rosie's favorite subject, but she was also fond of learning foreign languages. She attended French Language high school in Bulgaria and continued writing in Bulgarian and French. Rosie also attended college for three years with a major in French and was on her way to becoming a French language teacher when she immigrated to North America. Since then she has had many jobs (in addition to being a mom); she's been a house cleaner, an airport security officer, a waitress, a door-to-door sales person, an office assistant and a registered dental assistant, to name a few.

But her passion for creativity has always been with her and since becoming a mom, Rosie has turned her focus on writing and illustrating children’s picture books in which she finds a great pleasure. Rosie is striving to create quality books that are fun to read as well as educational, with a good message, interesting characters and attractive pictures that young children will enjoy.

Rosie believes that books have the power to influence children early on and that they play an important role in kids' lives and development. Working in the direction of reinforcing traditional values through her stories, Rosie is hoping to make a humble contribution to the efforts of parents and caregivers alike on a mission to raise kids to become wholesome adults, by providing some tools for molding young personalities. Therefore, she envisages her books as a medium in helping to enrich children’s lives, bringing both value and entertainment with every story.

Besides writing, illustrating and publishing her picture books, Rosie has worked as an instructor at various Recreation Centers in her area of residence, teaching 'Story Time FUN-tastic', based on her own children's books,  and 'Fashionista's World' classes.

She is listed on the NETLS  (Northeast Texas Library System) Performers List at:
www.netls.org
Rosie Pova was featured 'Author of the Month' in March, 2010 on the Book Cubby.